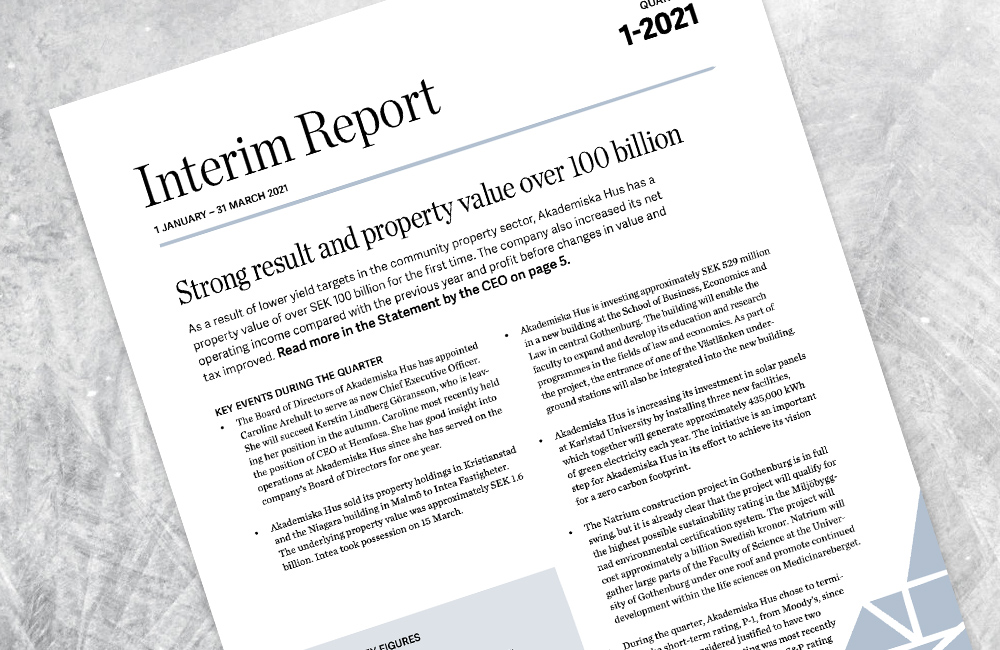 As a result of lower yield targets in the community property sector, Akademiska Hus has a property value of over SEK 100 billion for the first time. The company also increased its net operating income compared with the previous year and profit before changes in value and tax improved.

While activity on the country’s campuses is still restricted, current forecasts regarding vaccination rates raise hopes of a cautious return in the autumn. Questions regarding what the campus of the future should look like in order to continue to be attractive are highly relevant.

“Most people agree that the rapid shift towards distance learning and digital working methods will have long-term effects. However, it is uncertain in what ways and to what extent they will last. A number of collaborative efforts are therefore underway between Akademiska Hus and various centres of education, based on the increased focus on the climate issue, as well as on how premises and spaces should be used and on how future learning environments should be designed,” says Kerstin Lindberg Göransson, CEO of Akademiska Hus.

Lower yield targets within community properties result in rising valuations. In the Swedish property market, segments with reliable cash flows, such as housing and community properties, are still holding their own. During the first quarter, Akademiska Hus invested approximately SEK 800 million, but also sold its property holdings in Kristianstad and the Niagara building in Malmö. In addition, the change in fair value for the quarter is SEK 1.4 billion, which means that overall, the company’s property value has exceeded SEK 100 billion for the first time.

In February, a decision was taken to invest SEK 529 million in construction of a new building for the School of Business, Economics and Law at the University of Gothenburg. A few weeks later, a digital ground-breaking ceremony was held for the project, which also includes an entrance of the new Västlänken station. The School of Business, Economics and Law is one of many major Akademiska Hus projects that are underway and planned for the next few years in central Gothenburg.

During the period Akademiska Hus decided to increase its investment in co-working in Umeå and the newly opened A Working Lab Universum is now expanding with an additional 500 square metres in the middle of the Umeå Campus. The company also signed a collaboration agreement with Umeå University to further strengthen their mutually beneficial cooperation with the aim of achieving an even more sustainable campus where people thrive and perform well and where, for example, green environments and inclusive meeting places will become even more important to develop in the future.

Investments in solar panels are important for Akademiska Hus’ vision for a zero-carbonfootprint to become reality. The latest initiative entails three new facilities at Karlstad University that will produce 435,000 kWh of electricity per year. In total, Akademiska Hus’ solar parks on campuses across the country produce approximately 6 million kWh of renewable energy annually.